The Church of the Holy Faith

welcomes all people into an ever-deepening relationship with Jesus Christ our Lord.

We believe in God the Father, Son, and Holy Spirit, the Sacraments, and the Authority of Scripture.

We honor our Anglican heritage and praise God with solemn liturgy,
traditional Prayer Book worship, and music to exalt the spirit.

We strive to live as a community with compassion
for one another and the world around us.

We worship together in peace
to praise and thank God,
to transcend division, and
to celebrate the mystery of faith. 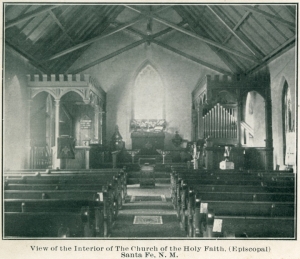 Holy Faith is the oldest Episcopal Church in New Mexico – and one of the oldest of any Protestant denominations. But we began in 1863, as a “house church” with only a handful of worshipers. Lay readers frequently conducted services because there was no priest. Early worshipers were often young Anglo soldiers and officers garrisoned in Santa Fe during the American Civil War. House church meeting places in those days included the Padre Gallegos House we now know as the restaurant Santacafe, the Lord Templars Hall on the Plaza and the governor’s reception room in the Palace of the Governors.

Since territorial days, The Church of the Holy Faith has been central to the artistic and political history of Santa Fe, New Mexico and the Southwest.  Early members and leaders included Senators Thomas B. Catron and Bronson M. Cutting, and one of our first governors, L. Bradford Prince.

Considered highly spiritual as well as a dedicated lay reader, Prince spearheaded a drive in 1879 to build a church for the Parish of The Good Shepherd, as it was then known.  Prince raised $363.12 for a new church but spent $250 for the lot on which Holy Faith now sits.  As the story goes, Prince and other church leaders sought out ten Santa Fe businessmen who were “encouraged” to donate $100 each, a significant sum in those days, for building the structure.  Other generous donors included several prominent merchants in the Jewish community.  Eventually, Holy Faith memorialized its Jewish friends with the crescent-shaped stained glass window over the entrance to the church.  Central the window’s design is the Star of David.  To this day, the window makes Holy Faith’s long history of interfaith collaboration apparent.

In 1880, Judge Prince led efforts to have the church named “The Church of the Holy Faith,”  translating the name of our state capital into English.

The cornerstone was laid in1881 and the structure completed in 1882.  The parish church we know today has been described as “folk gothic” because of its resemblance to the architecture of many English cathedrals and parish churches dating from the simplified style of the 13th century.  The first structure, built in 1881, was one of the first dressed-stone buildings in Santa Fe.  The stone itself was quarried outside the village of Galisteo, southeast of Santa Fe.

In the years since, Holy Faith has seen many additions and renovations, most notably under the leadership of renowned Santa Fe architect John Gaw Meem.  In 1953, Meem, a parishioner, engineer, and architect whose Pueblo Revival architecture became known as “Santa Fe style,” led the remodeling project.  Meem designed what is now the chancel and sanctuary.  In the redesign, Meem moved the stained glass window of “The good Shepherd” to the left of the altar and replaced it with a gift of three Gothic windows in bright red and blue hues.  Upon his death in1983, some of Meem’s ashes were placed in a niche on the east side of the sanctuary he designed.

Other additions include the richly historic reredos behind the altar  The reredos was designed in New York by Wilfred Edwards Anthony but carved in santa Fe by renowned artist Gustave Baumann.  The Chapel of the Good Shepherd was built in 1966 and contains artwork and carvings by local artist W. Shaw, also a parishioner.

In 2012, Holy Faith installed a set of Stations of the Cross carved by Chilean artist Andrea Pichaida.  Lining the walls of the nave, the 14 clay pieces tell the story of Jesus Christ’s condemnation, crucifixion and burial, a devotional practice said to have been developed by St. Francis.

On October 5, 2014, Holy Faith celebrated its 150th anniversary with the dedication by Bishop Michael Vono of a six-foot bronze statue of St. Francis of Assisi, the patron saint of our parish and the City of Santa Fe  Buck McCain, an Arizona artist with longtime ties to Santa Fe, sculpted the 500-pound bronze.

Holy Faith’s pipe organ, built by M. P. Moller, Inc. of Hagerstown, Maryland, was originally installed in November 1961, with renovations and additions in 1975 and 2001.  Today the organ, with its three manuals and forty-three ranks of pipe, is the largest in Northern New Mexico.  The music and liturgy of Holy Faith continues to maintain the highest standard of excellence in the Anglican tradition, drawing the people of God to that place where heaven and earth meet.