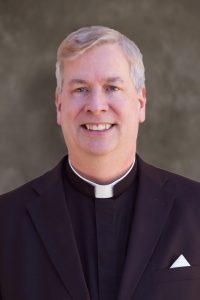 Sometimes, the difference between a subtle call and a recurring tug is disarmingly imperceptible.  So it was for Fr. Robin Dodge, who became Holy Faith’s rector on October 30, 2016. “The choice of being drawn to the ministry never really left me, even from a young age,” says Fr. Robin. “The concept of being drawn to church and being ordained was always with me.”

But not unlike many clerics before him, he wrestled with the angels in finding a pathway. After a church-oriented upbringing in Vermont, he earned a bachelor’s degree from Cornell University focused on the history of England during the Tudors and Stuarts and a doctoral degree in jurisprudence from Boston University.  He launched his legal career in Chicago and then moved to Washington, DC, where his practice concentrated on trademarks, copyrights and unfair competition.

Throughout the years the perceived call to the ministry remained.  He initially responded by serving as secretary to the vestry at Christ Church in Georgetown, and thought about combining the best of both worlds by becoming a parish administrator.   Finally, his rector pointed out the obvious: “Have you ever considered the priesthood?” “I kept feeling a tug. I was happy doing work for the church. It was invigorating to me. God calls us to be happy, and God wants us to be fulfilled in our careers,” he said in an interview after his institution.

But in the mid 1990s, and spurred on by the gentle encouragement of his mentor, the late Fr. Sanford Garner of Washington, DC – and a week of prayerful reflection — Fr. Robin arrived at a decision: “Well, the ‘pros’ for going into the priesthood filled a very long, long list, while the ‘cons’ made for a very short one,” Fr. Robin said. “Maybe God is trying to tell me that I should go into the priesthood.”

The rest is history. Yet, he likes to point out, it was not a “late call” to the ministry. “I’m a second-vocation priest. I can’t say it was late in life because I was only in my thirties,” he said.  “In fact, I was actually a youngster in my seminary classes, where half the men and all the women were older.”  He earned his master’s degree in divinity in 1999 at Virginia Theological Seminary. Following that, he was appointed associate vicar of St. Mary’s Episcopal Church in Arlington, VA. In 2002, he was appointed associate vicar of St. Mary Redcliffe Church in Bristol, England, and upon the vicar’s departure in 2004, served as priest-in-charge.

After 11 years as rector of St. David’s Episcopal Church in Washington, DC, Fr. Robin, now 58, has been a priest longer than he practiced law. But his legal career gave him a skills set and real-world experience that he brings to the priesthood and uses daily in his interaction with parishioners. “A lot of the skills of a lawyer are certainly transferable in the ordained ministry: public speaking, counseling, giving advice, administration – these are all skills a lawyer uses and a priest needs as well,” he said. “I like to joke that now as a priest, I just go before a different judge.”

Fr. Robin comes to Holy Faith grounded in core beliefs fundamental to our parish. “I see myself on the Anglo-Catholic side of things as an affirming Catholic, as an Anglo Catholic who can embrace the great Anglican heritage we have in the Reformed tradition, as well as continuing in the Catholic tradition. What we have here is the best that Christianity has to offer.”

This means a reliance on the authority of scripture, the Word of God, embracing and upholding the sacraments, and being bound in the holiness of worship. That said, he adheres to a centrist, moderate approach to change. He preaches from the pulpit, Anglo-Catholic tradition notwithstanding. “I consider myself to be an evangelist, because that’s what God calls us to be. God wants us to share the good news of Jesus Christ … and we have good news to share,” he said. “ The story of Jesus, his ministry, death, resurrection and ascension is absolute great news. I don’t want to keep it to myself. I want to share it with everyone. That means transforming our lives. The church can help us do that.”

Ed. Note: Fr. Robin was made Canon for Ecumenical and Interfaith Affairs at the annual convention of the Diocese of the Rio Grande, on October 19, 2017.

Fr. Jim, a late-call priest, discerned a summons to Holy Orders after working as a journalist for more than three decades. Santa Feans know him well as the author of “The Anti-Fan,” an award-winning weekly column that was published for over a decade in The Santa Fe New Mexican. He still occasionally writes opinion pieces for the newspaper.

Raised a Methodist, Fr. Jim left the church in his late teens and was inspired to study Zen at the Zen Center of Los Angeles. Exploring the works of D.T. Zuzuki, Robert Aitken and Philip Kapleau, he practiced various expressions of Eastern spirituality until, unexpectedly, he sensed the arrival of what author Ram Dass describes as the moment “when you find it’s time to get on with it.”

Fr. Jim assumed that getting “on with it” would mean a more serious plunge into Zen and, by extension, Buddhism. But during an Advent season in the late 1990s, the words of the 23rd Psalm — especially, the verse “He restoreth my soul” — began to resound in his mind. He felt prompted to read the Gospels for the first time as an adult and, soon thereafter, was moved to wander into a church up the street from his office at the newspaper. That church was Holy Faith.

In 2010, while still a working journalist, Fr. Jim was ordained to the diaconate, and, the following year, to the priesthood. Fr. Jim served as assisting priest at Holy Faith until early 2012, when he was called to be the curate at St. Thomas of Canterbury.

In 2013, Fr. Jim was called to lead St. Paul’s Episcopal Church, a mission in Marfa, Texas. In January 2015, he was called to be associate rector at Holy Faith, under the leadership of Fr. Kenneth Semon.

Fr. Jim was trained at the Diocesan School for Ministry, administered in association with Trinity School for Ministry in Ambridge, Pa. He brings to the church real-world experience, a pastoral heart and a love of liturgy and teaching.

His wife, Andi Shapiro, is an artist and poet.

Fr. Richard W. Murphy is a New England native born in New Haven, CT. He moved to Santa Fe with his wife, Carol, in 1997 to accept a call as Rector of St. Bede’s. He retired from St. Bede’s in 2011. Following retirement, he and Carol began worshipping at Holy Faith which has been and continues to be a rich and rewarding experience. He has served Holy Faith as Assisting Priest since 2016. Until then he has served as a supply Priest in many parishes throughout the Diocese of the Rio Grande and Navajoland. Since 2014 he has served as State Senate Chaplain during legislative sessions.

Fr. Murphy received his B.A. degree from St. John’s Roman Catholic Seminary, Brighton, MA, his M.Div., from the General Theological Seminary, New York City, and his Doctor of Ministry degree (D.Min.) from the Graduate Theological Foundation, Mishawaka, IN. He did is doctoral class work at the University of Oxford Summer Program in Theology which he continued to attend for several summers following his degree requirements. The focus of his doctoral work was in the areas of reconciliation and Anglican theology.

He was ordained a Deacon in 1989 and Priest in 1990 in the Diocese of Massachusetts where he served in two parishes prior to coming to Santa Fe.

Fr. Murphy been engaged in peace and reconciliation ministry in Northern Ireland and the Balkans. His ministry has involved, prior to and along with parish work, serving in civil rights, homeless, seaport and hospital work. Prior to seminary and ordination, he was a probation officer in Massachusetts. He is past president of our Diocesan Standing Committee and has served the Diocese in a number of areas. He is also past president of the Interfaith Leadership Alliance here in Santa Fe.

Fr. Murphy and Carol, a retired teacher from the Santa Fe Public School System, and a native of Springfield, VT, Fr. Robin’s hometown, are the proud grandparents of granddaughter, Walden, and grandson, Desmond. They and their parents reside in Chapel Hill, NC where son,  Jeremiah Murphy is a fellow in the University of North Carolina School of Journalism. He is pursuing a Master’s in Scientific Journalism. His wife, Carrie Sipple, is pursuing a Master’s in Speech Pathology.