Selected Music from the Mass of the Resurrection: Playlist

For Fr. Ken Semon, it all started at the altar. 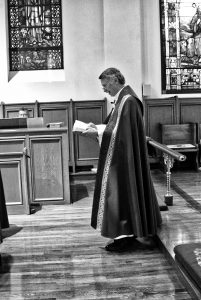 There, thousands of times, he celebrated the death, resurrection and ascension of Jesus Christ, the one who loved him and gave himself for him as a fragrant offering and sacrifice to God. The one who called him from the secular life of a professor of English literature to become a beloved rector of several parishes, including, for the last nine years, The Church of the Holy Faith in Santa Fe, N.M.

Thursday, two days after a bike accident near his home, the Lord called Fr. Ken home.

In Milwaukee, Wis., in 1945, Ken Semon was born into a Jewish family and was Bar Mitzvah’ed. Around age 30, while teaching at the University of Kentucky, he began to attend an Episcopal Church after he and his wife, Caroline, had their marriage blessed there. Shortly after that, he began learning the mysterious ways of God.

At the recommendation of his priest, Ken had a discussion with a bishop, who surprised him by telling him he should become a parish priest. “I told the bishop all the reasons why I shouldn’t, couldn’t and wouldn’t become a parish priest,” he said in a recent sermon. Undeterred, the bishop gave Ken a list of possible schools to attend. “Six months later,” Ken remembered, “we were off to seminary.”

At Holy Faith, he took over a church that had been rocked by scandal. Under his leadership, the church stabilized, recovered, then flourished. “He lived life with passion, devotion and was totally committed to the gospel of Jesus Christ and the broader mission of God’s one, holy, catholic and apostolic church,” Michael Vono, bishop of the Diocese of the Rio Grande, said. “Ken was a very faithful priest, serious about his pastoral work with all people and deeply spiritual. He was an excellent teacher and theologically focused preacher. Having these gifts and also being a wonderful administrator is not always common among clergy. He had both.”

Fr. Jim Gordon, an associate rector at Holy Faith under Fr. Semon and now acting rector, said, “Ken was a mentor to many by example. His dedication to the people he served, his love for and trust in Jesus, his consistent preaching of the Gospel, his disciplined prayer life, his love of the Eucharist all told you one thing: This was a man of God.” The Very Rev. Peggy Patterson, who served for five years under Fr. Ken, most recently as an associate rector, recalled her surprise when he called her to come to Holy Faith as its first woman priest, at first to cover the liturgies while he got two knee replacements, and then on a full-time basis. “During my five years at Holy Faith, Fr. Ken welcomed me as a respected colleague and trusted spiritual friend. His disciplined Benedictine Rule of Life, his passionate faith in Jesus Christ’s resurrection, and his kind and confidential pastoral ministry gave me an example that I shall always try to follow. I loved his joy in seeing the children of the parish learn about God and come to the altar to have him “put Jesus inside me,” as one child put it. His contemplative nature was never more evident that when he sat in silence in the church early each Sunday morning, spending time in silent prayer, listening to God.”

A rector’s life is not without difficulty. Fr. Mike Kinman, his curate in St. Louis, remembered how Fr. Ken handled the rough weather that came his way. “Every day, he showed me Jesus in his love, humility, prayerfulness and immersion in Word and sacrament — often in the midst of intense conflict that all-too regularly spilled over into personal attacks on him — not to mention his incredible patience with this overeager, know-it-all young curate. “Ken taught me how to center all things in prayer, to run to Jesus when the storms get rough, and to trust unflinchingly in resurrection especially in the valley of the shadow of death. He modeled returning venom with gentleness in ways I still strive to embody half as well as he.”

Fr. Ken loved the liturgy of the Anglican tradition and took a special interest in music. To him, the church’s rich choral heritage was “part of the sacramental three-legged stool of music, liturgy and preaching.” A Benedictine oblate who loved to pray the Daily Office of the church, Fr. Ken was a man of contemplation. Yet he also was a man of action, ministering to the needs of the homeless through his tireless work in establishing a permanent location for the Santa Fe Interfaith Community Shelter. Guy Gronquist, a former chairman and current board member, said, “Fr. Ken was one of a handful of individuals without whom

[the shelter] would not exist.”

Fr. Ken’s fondness for literature never left him, and he was fond of quoting from Shakespeare and Milton’s “Paradise Lost,” which he said, with a smile, that he held to be nearly as authoritative as Scripture.

When he wasn’t working, Fr. Ken loved to be outdoors, particularly in the mountains, and in his spare time worked for years as a certified skiing instructor.

As he approached his 71st birthday in September, Fr. Ken was looking forward to retiring as rector, moving to Bristol, England, where he and his wife, Caroline, could spend more time together and enjoy seeing their daughter Jennifer and grandchildren. Additionally, Fr. Ken was looking forward to working as an assisting priest at All Saints, Clifton, where his friend The Rev. Charles Sutton, was vicar.

On Tuesday, July 26, on a bike ride, Fr. Ken’s front tire wedged between two cattle guards, causing him to be thrown from the bike and be rendered unconscious, despite his wearing a helmet. He was taken to a hospital with severe injuries. Two days later, surrounded by family and friends, he died in peace. 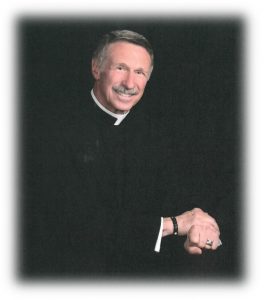 Service bulletin for the Mass of the Resurrection:     I believe in Paradise

Selected Music from the Mass of the Resurrection: Playlist

Mass of the Resurrection in celebration of the life of The Reverend Canon Kenneth J. G. Semon, 08/10/2016, Father Jim Gordon.

Please click at left side of audio bar to start and stop file playback.